Towering high over Linwood and overlooking Glasgow Airport, two tower blocks are the latest developments to benefit from major refurbishment works aimed at significantly improving the energy efficiency of properties in the town.

One of the largest housing associations in Renfrewshire, Linstone Housing has more than 1570 properties in its portfolio and is part of an on-going wider regeneration program to bring all social housing in line with Scottish Housing Standards.

Belmar Court and Asbury Court were built in the 1970s and were designed to meet the longer-term needs of older people due to their ideal location and accessibility to amenities within the area.

With each building consisting of 87 flats over 16 storeys and all electrically heated; energy efficiency was poor, contributing to high heating bills and pushing many residents into fuel poverty. As one of Linstone’s most prominent developments, improving these buildings had become a high priority.

Wetherby Building Systems were approached by E.ON to recommend a suitable EWI solution for the two 40 metre tall buildings that would also address all fire safety requirements and regulations.

Due to the age and construction of the buildings there were some minor structural works needed & remedial cavity wall ties were installed prior to the application of EWI. Wetherby’s technical team also worked closely with E.ON & structural engineers, A.J. Balfour Associates to ensure wind load calculations and mechanical pull out tests were carried out detailing the correct type and number of insulation fixings to be used.

Wetherby’s 100mm non-combustible Stone Wool insulation was specified due to its superior fire performance along with its excellent thermal & acoustic properties. The final appearance of the blocks benefited from a combination of dry dash finish in cream to all elevations to ensure a hardwearing and durable surface. This was complimented with Wetherby’s silicone ‘K’ 1.5mm terracotta render panels to create a visually striking design.

On completion of the project the U-values have been improved dramatically from 1.41w/m²K to 0.29w/m²K meeting current building regulation requirements and meaning the residents will benefit from considerably lower heating bills.

Commenting on the project, a spokesman for E.ON said: “This was an important refurbishment project for Linstone Housing and it was vital that the EWI not only significantly improved energy efficiency, but also transformed the appearance of the flats.

“Wetherby’s technical team played a crucial part in ensuring the most appropriate system was installed, but also advised us on additional elements such as fixings, correct detailing and remedial work to ensure the correct installation and performance of the EWI system. This can only be described as an exemplar project on how a high rise buildings should be carefully planned, managed and delivered” 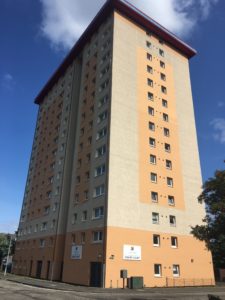