Modular construction is becoming increasingly popular and this latest collaboration is a great example of how to achieve a quick and cost effective new build without sacrificing thermal performance and design.

As part of a new initiative Wetherby teamed up with Manchester based Procure Plus and Osco Homes with the aim to deliver affordable houses offsite within a factory based in Hindley Prison, Greater Manchester. The scheme was set up to recruit prisoners in their final year of sentence providing training to build external walls, and floor and ceiling cassettes of panelised homes. Each prisoner is paid a salary for their work by Osco Homes and employed full time upon their release. This has not only been an opportunity to tackle the current housing crisis but has provided a deeper social impact within the wider community.

St Hilda’s Crescent is a development of 7 two storey houses situated on a strip of land between an already existing new build development. It was constructed as the result of a partnership between Leeds City Council and the Together Housing Association. It was important to deliver this project with minimal disruption to the local residents but also keeping a traditional design that would complement the surrounding area.

With constraints from the site and a lack of available working area, a modular build was the perfect solution to overcome these challenges. By manufacturing precision designed unit’s offsite in controlled factory conditions and transporting them to the location means the majority of the build is completed away from the site resulting in no scaffolding requirements onsite and minimal interruption throughout the neighbouring community.

Wetherby’s Modular Brick Slip System has been specially designed for application in factory controlled environments and is complete with a range of real clay brick slips enabling the desired traditional finish to be achieved. The unique tongue and groove interlocking, high density EPS insulation boards offer a superior strength with high impact resistance and protection from water ingress. The insulation boards are ribbed to provide the course for brick slips significantly reducing installation times allowing the scheme to be completed with no delays. Wetherby’s clay brick slips are manufactured and fired in the same way as traditional clay bricks meaning the design has not been compromised and is a great addition to the already existing community.

Once the units were transported and in place a brick slip soldier course was installed between the ground and first floor giving a seamless brick elevation and improving the overall build process.

Our Technical Sales Manager, Pat Stanley had this to say about the project: “Wetherby are delighted to have been involved in this project which has proved to be a great success. The community has not only benefitted from much needed new homes but enabled a welcomed social impact giving prisoners a new focus for their future. 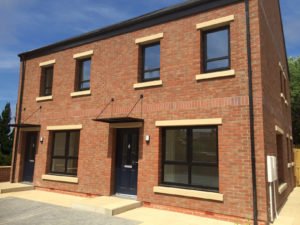 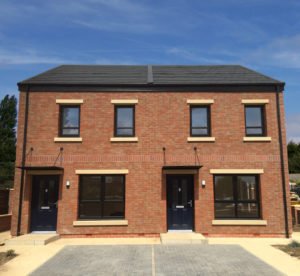 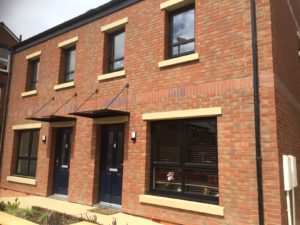