A major £38m development to construct a new state of the art school in Jersey has utilised Wetherby’s External Wall Insulation System with over half a million clay brick slips covering the facade of a whopping… 60,000m² build.

Les Quennevais School was originally built in the 1960’s on the west of the Island and was designed to accommodate a maximum of 450 students across its 14,000m² of land. Over the years, the school has steadily increased its student intake and at present it now has a student population of around 700. The recommended space for this number of pupils is at least 50,000m² meaning the school has been functioning way over capacity. The building has remained untouched since being built resulting in it falling into a state of disrepair, facilities have become more and more out dated and learning spaces have been severely compromised.

With this in mind the Department for Education submitted plans to relocate the school to a new site in order to provide the space required and provide the students with a modern and energy efficient building. Director of Education, Justin Donovan spoke about the construction of the new modern secondary school. He said: ‘One of our main priorities is raising standards and there is only so much that a student can achieve with the current building. No matter how hard the staff work at Les Quennevais they are going to hit the ceiling when it comes to raising standards.’

Sarah Hague, the head of Les Quennevais, said it was important for her students to have the same opportunities as pupils from other States schools. Sarah said; ‘The building is 50 years old and it has had its time, it has had its day. It was built in the mid-1960s – we have low ceilings, small corridors and very few communal spaces.

Extensive research was done into the most suitable site for the new premises as it was important for it to fall within the existing catchment area. Planning permission was finally granted in 2018 for the fields next to Rue Carrée and La Route de Quennevais.

Rok Group were awarded as the main contractor for the new premises and approached, Wetherby recognised installers, Fox Contracts Ltd to assist in the construction and external envelope of the build.

After careful consideration for a project of this size, Wetherby’s Brick Slip System with Stone Wool Insulation was specifically chosen. Stone wool insulation is an ideal solution for education applications due to its excellent acoustic performance combined with its non-combustible inorganic rock wool core meaning noise can be minimised throughout and strict fire regulations can be met. Stone Wool Insulation is a consistent density, high strength, rock mineral wool slab with a water repellent additive and has increased long term compressive strength capabilities. By incorporating stone wool insulation throughout the new build in various thicknesses, it has ensured thermal performance is maximised meaning a u-value of 0.30 W/m2K or less can be achieved.

The stone wool insulation boards were fixed onto a combination of blockwork and steel framed structure (SFS) and due to the scale of this project, it was vital to complete the system with a durable façade that would also incorporate the monumental design aspirations set out in the beginning.

The school design incorporated multiple pillars and window reveals throughout the build, so it was paramount that the system could work to this pan. Due to the Wetherby Brick Slip System offering both brick slips and pistols (corners), the design aspirations could be met and install made easier for the contractor.

Wetherby’s ‘real’ clay brick slips are manufactured and fired in the same way as traditional clay bricks meaning a project of this size could benefit from a genuine brick finish without compromising on design. By opting for a brick slip façade, it has significantly reduced the installation time and costs compared to a full brick meaning strict deadlines have been met and the school is ready to welcome students and teachers back ahead of the new school term.

The biggest difficulty with this project was the spotlight it put in, as already being high profile it was going to be the largest brick building in Jersey the whole island was watching with regular visits from architects from Jersey and the UK. As with any project there were some initial teething problems to overcome but with the support of ROK, the expertise and attention to detail of FOX Contracts and the presence of Wetherby’s site support managers these were quickly overcome to leave the exceptional finish now seen.

The aesthetic appearance of this build has been a great success and with such a monumental surface area to install brick slips it has also been one our largest brick slip projects to date. The building has an outstanding finish in Wetherby’s white smooth brick slip and is now a very much desirable place to go.

The teachers and students of Les Quennevais School are delighted with the results and can now arrive each morning to a building that makes them feel there are no limits on what they can achieve. Future generations can also be assured they have the best possible experience and opportunities available to them.

Sarah Hague, Headteacher said ‘The new Les Quennevais School will truly be a school for the future. It will inspire and drive the ambition of a whole new generation and transform the experiences of our staff and students. We are hugely excited, proud and feel truly privileged to at last have the facilities that match the outstanding teaching that we deliver day in day out.’ 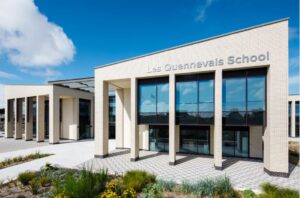 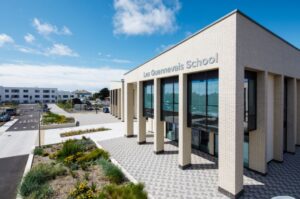 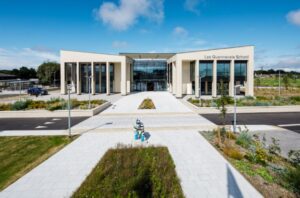 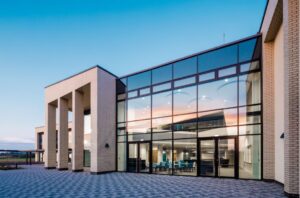 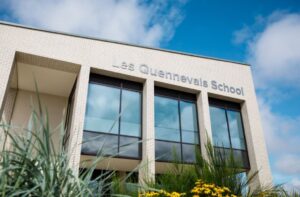 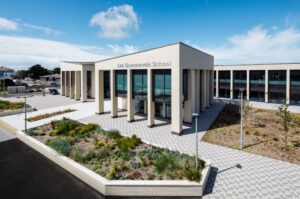 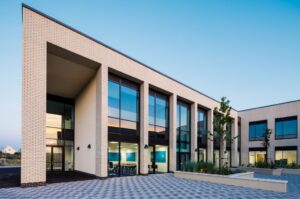 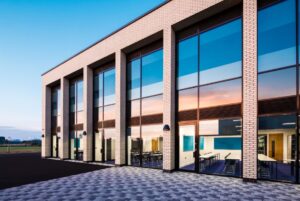 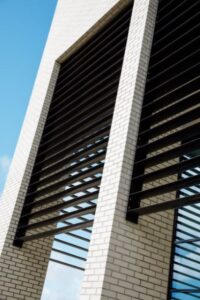 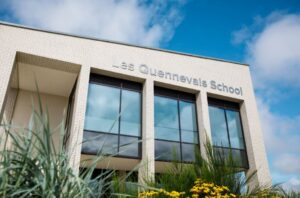