North East Lincolnshire Homes are committed to improving the quality of life of their residents and improving the image and physical appearance of the area in which they live.

Guildford Street in the East Marsh area was recognised as being one of the top 3% most deprived areas in the country. A significant proportion of the properties were vacant and the street was associated by those that lived in the local area with antisocial behaviour and crime.

As part of an overall plan to improve the area the decision was made to refurbish these run down terraced houses, rather than demolish them and make the area one in which people wanted to live again.

A Wetherby Insulated Render System was specified for the scheme as its thermal properties would give the tenants warmer homes and its silicone finish provide the modern finish North East Lincolnshire Homes were looking for.

60mm Kooltherm Phenolic insulation was mechanically fixed to the existing substrate, followed by a K&A basecoat layer into which a strengthening alkali resistant mesh was bedded. Once dry this was then covered with a further layer of K&A to give a smooth basecoat. A Wetherby 1.5mm Silicone ‘K’ Render topcoat was applied in various bright shades to provide the cheerful bright façade that has totally transformed the area. The phenolic insulation reduced the U-values of the properties from 2.10 W/m²K to a cosy 0.33 W/m²K. 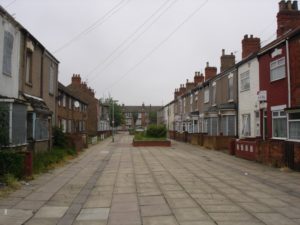 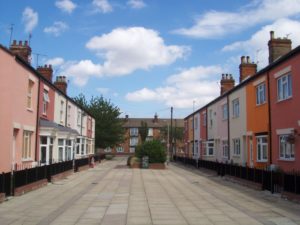 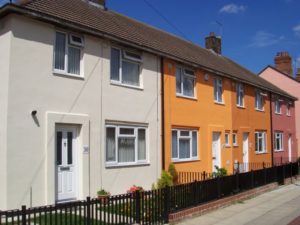 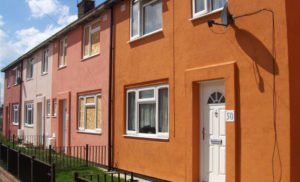