Hyde Housing are removing the cladding on all five apartment blocks and replacing it with a safer, modern alternative as part of a response to improve the safety of their homes following the Grenfell tragedy. Testing commissioned by Hyde Housing revealed cladding on the towers had to be replaced to ensure resident safety.

The improvement works include external cladding and insulation, rewiring, roofing and ventilation, as well as extensive environmental improvements. All 440 homes within these tower blocks are fully occupied so it was paramount that disruption and noise levels were kept to a minimum and continuous resident engagement was high priority to ensure all home owners were up to date and happy with the work being carried out.

Axis and Wetherby recognised installers, Lawtech were awarded the contract for the replacement of 14,000m2 of External Wall Insulation to all five high rise blocks. Throughout the project, each high rise was specified with Wetherby’s Stone Wool Insulation in a thickness of 110mm onto masonry substrate. Wetherby’s A2 system was chosen due to its superior fire performance capabilities along with its excellent thermal & acoustic properties. The final appearance will look similar to the existing cladding but will be complimented with Wetherby’s Silicone ‘K’ 1.5mm render to create a visually striking look whilst benefiting from a flexible high impact finish. Wetherby’s A2 system is fully compliant with SWIGA (Solid Wall Insulation Guarantee Agency) which has also given the residents peace of mind their homes have been completed under stringent high standards of quality and all works have been carried out by recognised contractors with significant industry experience.

The Mayor of Gosport, Councillor June Cully said: “Garland Court has been given a new lease of life and looks very smart. I would like to thank the residents for putting up with the disruption whilst the works took place and hope they are now able to relax and enjoy their much improved homes.”

Hyde Director of Compliance, Liz Oliver, explained our emphasis on community engagement has been key to the project’s success. “This is not an easy job. For example, the towers all face the Solent coastline, which meant covering them with protective sheeting to protect both buildings and workers. We also knew it would be a lengthy project, so it was really important to be clear, honest and supportive in our communications with residents.

“Not only did this demonstrate our commitment to going ‘above and beyond’ to ensure resident safety, but also meant we could resolve problems quickly, minimising disruption.”

The project has been held up as a best practice example of recladding work, with visits by housing associations, local authorities and government officials. It was also one of the winners of Inside Housing’s Resident Safety Campaign in 2019 and is a finalist in the 2020 UK Housing Awards for ‘Campaign of the year’.

“The new cladding will ensure residents’ homes are safe and secure for many years,” Liz said. “The towers are now seen as a positive part of the area’s regeneration, even forming part of Gosport’s Heritage Walk.”

Rowena Toseland, who has lived in Garland Court for over 20 years, said: “My flat was looking a bit tired and was in need of a makeover. I’ve since had my kitchen and bathroom replaced and redecorated, a new front door, and much improved insulation. Everything is so much cleaner and brighter now. It’s gorgeous!” 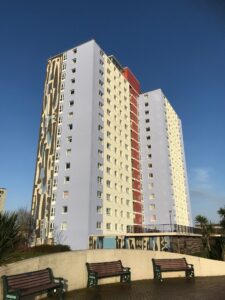 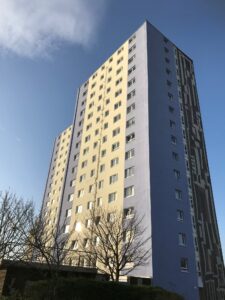