The Clock Tower Retail Park in Chelmsford has recently opened its doors bringing new stores along with the restructure of the city’s most iconic landmark; the Britvic Clock Tower. With the help of Wetherby’s versatile silicone render, the renowned clock tower has been reconstructed with a new contemporary look.

The site was previously home to Britvic, one of the city’s best known soft drinks brands but after numerous negotiations the site was sold to Aberdeen Asset Management with a view to transform it into a retail park.

The original clock tower has been considered a key part of Chelmsford’s landscape since 1955 when it was built so it was of high importance to ensure the restructure of this had the community at the forefront.

Wetherby’s silicone render has provided a durable finish for the new clock tower boasting an anti-crack formulation. The UV resistant pigments have also allowed the surface areas to be seamlessly rendered achieving perfect colour consistency making this a striking feature that the city can be proud of.

The new tower has been described as a “public art installation” which sees bubbles of light rising up the construction when the clock strikes the hour. This will be a permanent reminder of the sites connection to Britvic and the importance of the company to the city. 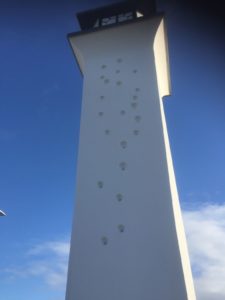 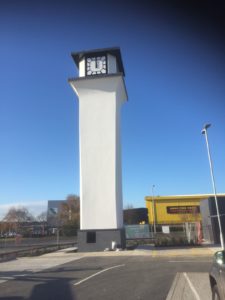