The properties in this first scheme by Carbon Logix were built in Murton using ICF construction methods.

ICF (Insulated Concrete Formwork) consist of hollow lightweight components that are formed of expanded polystyrene, held together with plastic ties and that lock together without bedding materials to provide a formwork into which a reinforcing concrete is poured.  Once the concrete is set it provides a concrete frame structure with the ICF blocks remaining in place that act as a thermal insulation layer. The ICF build process can be up to 50% faster than traditional building methods. It is a relatively low-skilled and flexible method of construction, requiring little in the way of plant and is recognised as a Modern Method of Construction by the BRE.

The U-value of the these blocks was an impressive 0.21 W/m²K and the amount of heat lost at the junctions of windows and doors within the wall is much less than that of a traditional build and this is maintained over the life of the building.

Because the insulation is already in place, to complete the façades on some of the properties, a decorative Wetherby Render System was chosen.  A basecoat was applied to the ICF blocks followed by an alkali resistant mesh and a Wetherby 1.5mm ‘K’ silicone render in white.

Other  properties required a more traditional finish so it was here that the Wetherby Brick Slip system was used, incorporating a Wetherby profiled brick mesh that was mechanically fixed to the ICF blocks with temporary fixings until an accurate alignment was achieved.

Permanent steel fixings were then installed to hold the mesh firmly in place.  The backs of the brick slip pistols were buttered with Wetherby Brick Slip Adhesive and applied to corners, door and window reveals then brick slips  buttered and arranged within the mesh, with bricks being cut to size using a bench saw or standard tile cutter as required. The brick slips were left to set for 48 hours and pointing mortar applied using a pointing gun with the joints being smoothed using a pointing trowel and once dry brushed down with a stiff brush to remove any excess mortar. 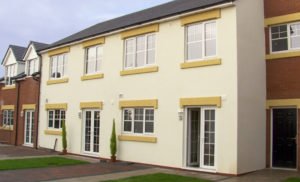 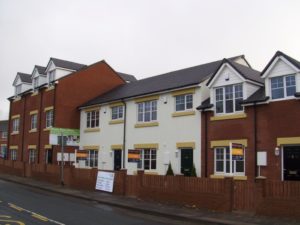